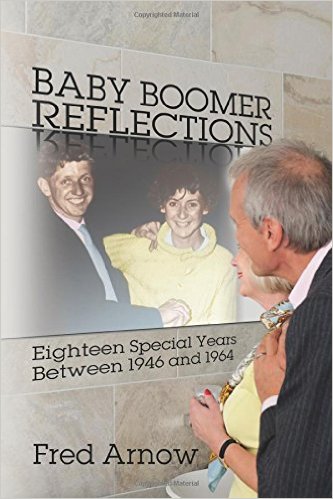 After World War II ended, there was jubilation amongst the general population, a feeling that this time, everything would get better. Indeed, the jubilation sparked a huge increase in the number of children, a generation subsequently known as the ‘baby boomer’ generation. The world was a different place then, different brands, different values, and different expectations. But above all, the people were different. It is said that childhood shapes a person’s adulthood, and so it is only natural that someone who had a childhood so far removed from today’s experiences should write about the experience.

Fred Arnow was born in 1946, and his book Baby Boomer Reflections covers the time from then until 1964 upon his high school graduation. The book is narrated with an unusual voice, a house built in the 19th Century details all the ins and outs of the era, coupled with a wealth of images. The latest crazes, dances, and social activities are all detailed in chapters which are similarly unusual: they are all the names of songs of the time which relate to the subject under discussion.

One of the best things about Arnow’s book is that it can appeal to a wide audience. It has excellent descriptive language and a good explanation of terms and brands which may be unfamiliar to the modern audience.

Despite this the fact is the narration can be a little stilted, but I believe that this has a simple cause: the unusual narration style. Arnow seems to have plenty of stories himself, born into a family of three, a veteran of the Vietnam war in the US Navy, married for forty years… The impetus for writing the book was a reunion of schoolfriends, yet by describing solely the ‘boomer years’ it feels like we are missing out. Even if the stories of later life are being saved for later life, the narration by a house was not something which I have seen before and I feel like it was more a gimmick and referenced in places where things needed to be moved along rather than using a more natural development.

A fascinating look at a different world

I wondered when I was reading it whether it would appeal much to non-Americans. The brands are American, the people are American, the shows are American, the pastimes are American. Why would a European be interested in someone growing up 70 years ago hundreds of miles away? Yet on reflection I feel that it may be a more specialist book, one of those rare books written about an event by someone who was there, who was a part of it and as such qualified and justified in their authorship. It may not appeal to the main markets in Europe, but it is undeniably an interesting and well researched book which should appeal to those interested in the era and also simply to those curious as to what has changed in the world in that stretch of time.

Given that it is a self-published book, the editing is not always of a standard which one would expect of a major publisher. There is the odd grammatical error (“to for”), spelling error (“thermose”) , and factual error (Queen Elizabeth is the Queen of the United Kingdom of Great Britain and Northern Ireland, and is not referred to as “Queen of England”). However, these do not detract from the overall read which is very good, and Arnow conveys a lot of information in the book; I hope Arnow continues writing and that I will be able to read stories of his career at some stage.

In 1956, that song [Memories Are Made of This by Dean Martin] reached number one on the Billboard chart and stayed there for six weeks.

Narrative- in his eagerness to give information, Arnow gives some clumsily and uses an unnecessary gimmick, but despite those issues it is well written and informative throughout- ★★★★

Readability-an interesting read which sets the scene expertly, but some of the lists make for less smooth reading- ★★★★

Overall-a very interesting read, but one which perhaps needed a little more polish- ★★★★ (80)

A free copy of the book was provided to me in return for an honest review.