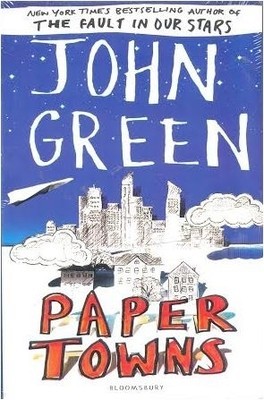 Philosophical and meaningful, one of John Green’s best.

There’s a quote I heard recently: “It’s a paper town. Paper houses and paper people”. It’s intriguing how many philosophical questions and arguments can be found in the pages of a young adult novel, though you may be a little less surprised if I told you that the author of this novel, Paper Towns, is none other than John Green of The Fault in Our Stars fame. Paper Towns is the first book by Green that I have read, but from my experience with this one it will not be the last. It was witty, charming, and interesting, and one which I would definitely recommend reading (and/or watching the film which comes out today).

Quentin ‘Q’ Jacobsen is an ordinary teenager in Florida, a few weeks away from his high school graduation (which for those of you, like me, who didn’t know what that was, it’s the end of sixth form/year thirteen). One night, the girl who he has always loved yet is distant from, Margo Roth Spiegelman, appeared at his bedroom window. Margo had an eleven-point plan of action for the night; filled with action and retribution. Yet when Margo disappears the next day, Q and his friends must try and follow the scanty clues, not only to find Margo, but to find out who she truly is.

One of the main things in Paper Towns which enamoured itself to me was the clever usage of words with multiple meanings, and by picking a title which has a meaning many readers are unaware of (or the majority are aware of under a different name) makes it both profound in the context of the book, and spoiler free as Q is as curious to discover the true meaning of the words as the reader is.

One of the issues with the book is that not much happens in terms of plot. It could probably be summed up in a sentence or two, and readers who are fond of action (as I often am) may be left wanting. However, on the flipside of that, Green provides multiple philosophical questions and thought provoking narrative, and makes Paper Towns an intellectual rather than adrenaline fuelled read-hence I enjoyed this aspect, it made the book into something unputdownable.

One of the other things I enjoyed about the book was the quotability throughout. This is one of those books where you are hooked from the start, the opening directly addresses the reader and is one of the best I have read in a long time (I put it below).

But throughout Paper Towns, Green makes multiple points in simple manners and with analogies with which the reader can interact, and which should provoke some fascinating lines of thought.

Opening line-The way I figure it, everyone gets a miracle. Like, I will probably never be struck by lightning, or win a Nobel Prize, or become the dictator of a small nation in the Pacific Islands, or contract terminal ear cancer, or spontaneously combust. But if you consider all the unlikely things together, at least one of them will probably happen to each of us. I could have seen it rain frogs. I could have stepped foot on Mars. I could have been eaten by a whale. I could have married the queen of England or survived months at sea. But my miracle was different. My miracle was this: out of all the houses in all the subdivisions in all of Florida, I ended up living next door to Margo Roth Spiegelman.

The way I figure it, everyone gets a miracle.

Character development-John Green creates fairly realistic and likable characters, though I am left dubious of the plausibility of both the general friend groups and Q’s close friends-★★★★

Readability-enjoyable and gripping in equal measures, and with well argued points-★★★★★

Overall-brain food, interesting journey, deep and philosophical characters-it may sound like a heavy combination, but Green pulls it off with some style-★★★★★ (99)